The pitching duel of the 2014 season came to Mulcahy Stadium Sunday night for game #1 of the AABL City Championship. Corey Madden, pitcher for the #1 seeded Hornets, trailed 1-0 in the bottom of the ninth. Opposing pitcher, Mike Smith for the SouthCentral Titans, was equally in control tossing eight shutout innings. Josh Morland scored the lone run in the 7th inning on a wild pitch after collecting a base hit, only the 4th of the game at that point for the Titans. However, a lead off single by Hornet's Nick Nadine and a walk to Ty Clapper put two on with no outs in the bottom of the ninth. Following a sacrifice bunt attempt by Sheldon Rouzan which loaded the bases, Corey Madden knocked in the tying run with a fielder's choice. The next batter, Anton Maxwell, hit a high fly ball to left field providing for some excitement as Ty Clapper tagged and scored the winning run.

Smith finished with 7 strikeouts and Madden 14.
Royce Woodruff had two hits for the Titans and Trevor Harrison two for the Hornets.

Hornets win Triple Crown! The Hornets (29-1) finished off a spectacular season with a Game 2, best of 3, victory over the SouthCentral Titans, 9-4. The Titans led early with a 2-0 margin following a hot by Charlton Ferreira, an error, then some savvy base-running by Josh Morlan. However, legendary pitcher Ken Wooster for the Titans was finally tagged for 6 runs in the 4th, following six base hits including 2 RBI shots from tournament MVP Taylor Reed and All-League Player and game pitcher Anton Maxwell. Jeremy Wylie was an additional spark plug knocking out three hits and contributing two more RBI in the 5th inning. The cherry on top was a lead-off homerun from Nick Nadine in the 6th, a towering drive over the left-center field fence. Titan's Danny Mascelli and Taylor Nerland added RBI singles later in the game to finalize the 9-4 victory. This caps a 5-1 tournament for the Hornets and the City title, which compliments the State and regular season crowns.
Royce Woodruff added three hits for the Titans 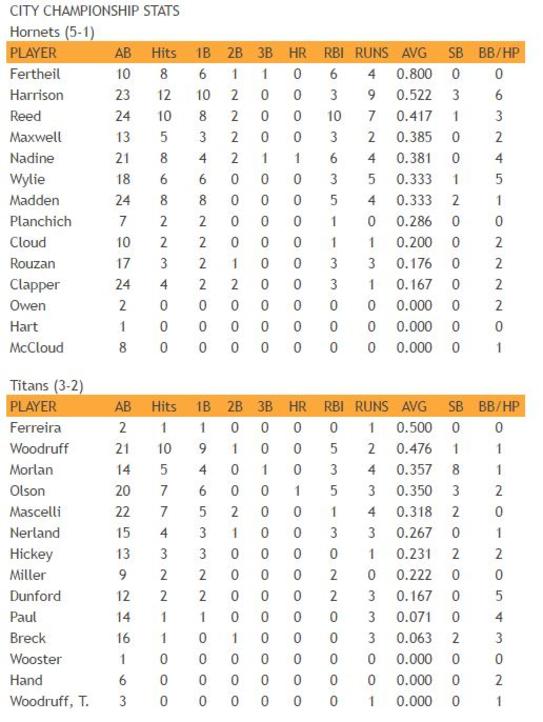